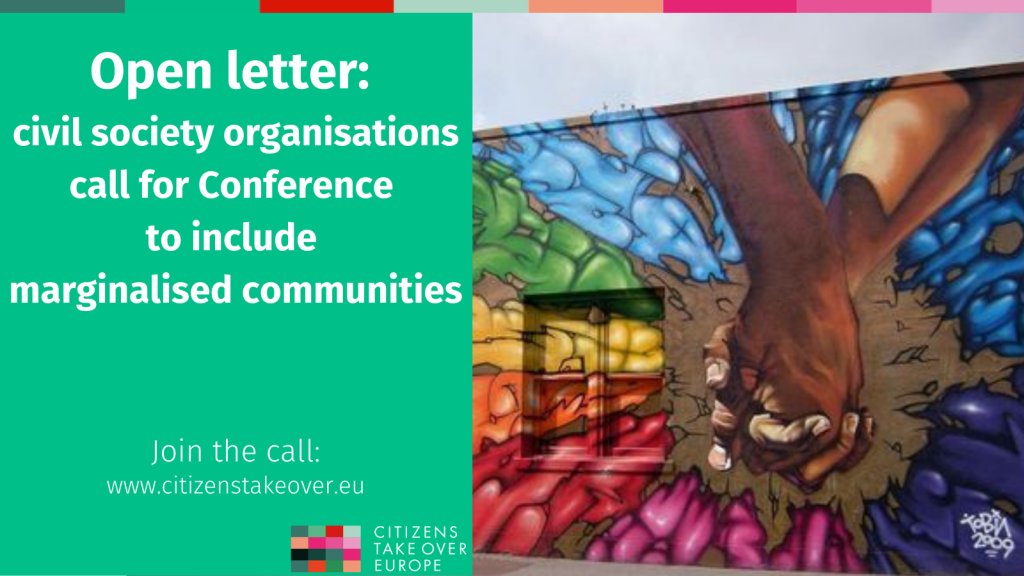 Dear Co-Chairs and Members of the Executive Board,

The inaugural plenary of the Conference on the Future of Europe is taking place on Saturday, 19th of June. According to the Joint Declaration, the Conference aims “to give citizens a say on what matters to them,” and to take action in response. However, we fear that the Conference will lead to the further marginalisation of citizens and residents that are already sidelined given the process and plans that have been made until now.

The Conference has so far not made adequate provisions to include marginalised and underrepresented communities. The European Citizens’ Panels are the main innovation of the Conference, and a key instrument to reach underrepresented people. Unfortunately, no quotas have been set to ensure the representation of underrepresented groups such as racialised people, LGBTQI+ people, people with disabilities, etc. Additionally, EU residents without EU passports and non-binary people seem to be categorically excluded from the panels. Furthermore, the Conference Plenary – the main decision-making body – does not seem to foresee adequate representation of these groups either.

It is in our common interest that this Conference becomes a success, but it can only become a success if all of Europe’s citizens and residents are provided access, included and treated as equal partners in this dialogue. If the EU fails to involve the most marginalised in our society, it will not only fail these communities but it will also fail to gather crucial knowledge about fundamental societal challenges, and the appropriate measures needed to build stronger, inclusive and cohesive societies.

We urge you to meet with us in the coming period to consider the concerns expressed in this letter, and to consult with organisations representing and working with marginalised communities such as some of the co-signatories of this letter.

Moreover, we call on you to develop a strategy of inclusion in relation to the Conference to ensure that marginalised communities are adequately represented and involved in the Conference, and to do so in consultation with civil society actors. We are at your disposal to support this process.

Together we win, divided we fall. We will only make this Conference succeed if it includes all citizens and residents.

We look forward to hearing back from you.

Civil society organisations can co-sign this letter by filling out the following form. The deadline is Friday, 18th of June, 18:00 CEST. The letter will be sent to the members of the Executive Board on Saturday morning, 19th of June.

Open letter to Executive Board: civil society organisations call for Conference to include marginalised communities

Civil society organisations can co-sign this letter by filling out the following form. The deadline is Friday, 18th of June, 18:00 CEST. The letter will be sent to the members of the Executive Board on Saturday morning, 19th of June.

CTOE is concerned: the Conference on the Future of Europe starts as a tiger, but it might end as a bedside rug