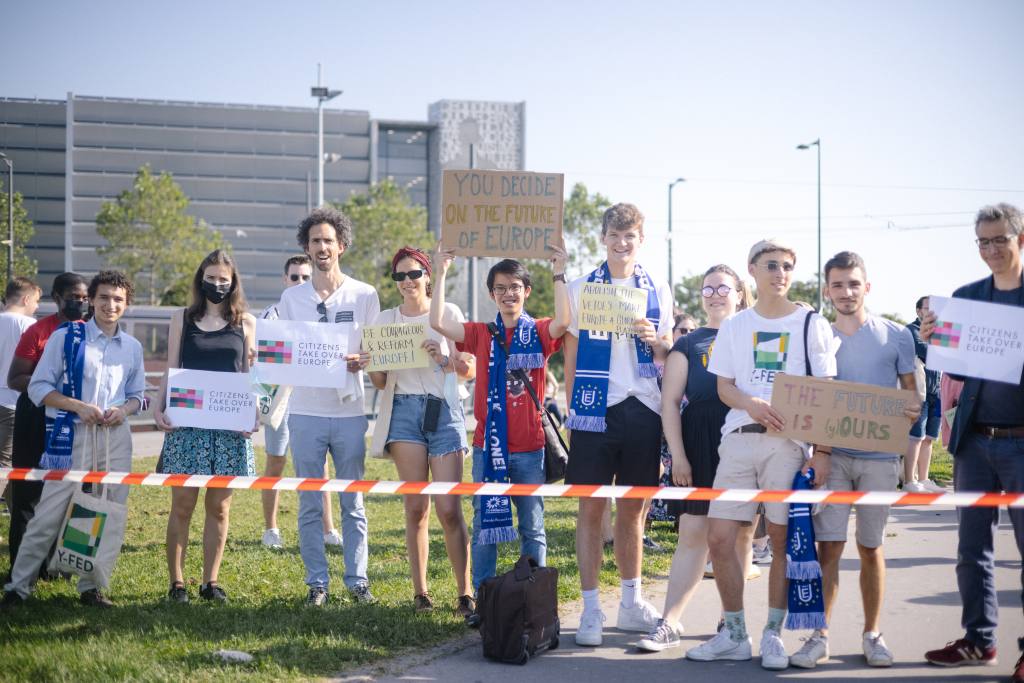 Citizens Takeover Europe will take part in “EUmans in Warsaw ”, the pan-european congress that the citizens’ movement, between the founders of our coalition, will hold in the Polish capital on the 11 and 12 of March.

The focus will be the shaping of a campaign on European Citizens’ Assembly.

Why build this campaign now, with a war breaking out at the gates of Europe? We think that only by opening a wide, transparent and transnational public debate, the European civic society will be able to contribute with ideas and proposals that can help the dramatic situation in Ukraine, and pave the way to the reforms needed for a stronger Europe in a peaceful world.

Interested in participating in this debate? Find here all the information and register if you want to attend the congress (both online and offline participation are an option)

Assemblies of Solidarity in Warsaw

The Assembly of Solidarity focusing “Mental health in the LGBT+ community in Poland” planned in the original programme has been modified. As most LGBT+ activists focus their efforts and energy on providing an emergency response to Ukrainian refugees, the event has been transformed into a city tour of Warsaw to go and meet with LGBT+ organisations active on the ground. This tour will serve to collect demands from the organisations to the EU institutions and will also serve the function of an awareness-raising campaign, by gatherings testimonies and interviews. The first results will be shared on the Friday 11/03 at 4pm during the session “A European platform for civil rights and individual freedoms initiatives ”.

PRESS RELEASE of the EUMANS Congress in Warsaw

HUMAN RIGHTS – EUMANS, PANEUROPEAN CITIZENS MOVEMENT WILL HOLD ITS CONGRESS AND A
DEMONSTRATION IN WARSAW, A FEW MILESTONES FROM THE WAR: HOW EUROPEAN CITIZENS CAN
ACT TOGETHER FOR A SUSTAINABLE PEACE THROUGH RULE OF LAW AND DEMOCRACY

Among the objectives, the support to the request of EU Membership submitted by Ukraine, the
intervention of International Courts and a EU defense, energetic and peace keeping policy, the opening of actions for end of life decisions and cannabis legalization

The Congress will be held on the 11th and 12th of March at the Copernicus Science Center in Warsaw.
HERE the full program and all the information to take part in person and online. Streaming will be availabe in Italian (Associazione Luca Coscioni), English (EUMANS), Polish (MISO)

The ongoing conflict calls for immediate action, but also for a rethink of European democratic institutions. These two topics will be at the core of the foundational Congress of the paneuropean movement EUMANS. Participants will discuss which direct actions and participatory democracy instruments can be activated by European citizens to defend themselves and the democratic rule of law from internal and external enemies, towards the goal of a “sustainable peace”.  EUMANS, the movement of European citizens for freedom, democracy and sustainability, founded by Marco Cappato, former MEP and civil rights activist (recently promoter of the collection of 2 million signatures in Italy for the referendums on the legalisation of cannabis and euthanasia, stopped by the Italian Constitutional Court). The event will be held at the Copernicus Science Center in Warsaw on 11 and 12 March 2022 and the full title is “The Open Congress of Citizens for Sustainable Peace, Freedom, and Democracy”.

Among the objectives of the event: support for Ukraine’s request to become a member of the European Union, invoking the jurisdiction of the International Criminal Court to identify those responsible (starting with Putin), the portability of civil rights in the European Union starting with abortion and the right to self-determination. In particular, the Congress will discuss an initiative for a “European living will”, the launch of the European Citizens’ Initiative for the legalization of cannabis, and the need to develop a sustainable European energy plan.

“Months ago we chose Poland for the founding congress of EUMANS because of its role as the frontline of the European confrontation on fundamental freedoms.  Today this place has become the frontier of a war. A war launched by those who have fear and contempt for democracy itself and for the rights of the indivudals”, said Marco Cappato, President of EUMANS, “From Warsaw we will kick off the construction of EUMANS as a pan-European movement of popular initiative, with a series of actions based on European civic participation on issues such as end of life, abortion, cannabis, right to science, fight against climate change, common European democratic defence policy, the creation of a permanent European Citizens Assembly by Sortition”.

The event is organised in collaboration with MISO – The International Institute for Civil Society, Associazione Luca Coscioni, Science for Democracy, EDUXO, Citizens Take Over Europe

EUMANS
EUMANS is a pan-European movement of citizens who, through the tools of participatory democracy, aim to
achieve the UN Sustainable Development Goals by strengthening the quality of life, ecosystem and democracy in
Europe. Eumans was founded in 2019, as a group of activists and volunteers, by Marco Cappato, former MEP
(1999 – 2009), non-violent civil rights leader with the Luca Coscioni Association, of which he is treasurer, and
Science for Democracy. EUMANS Eumans works with citizens and associations across Europe to strengthen the
impact of participatory democracy tools towards transnational policy goals. Read more: www.eumans.eu.