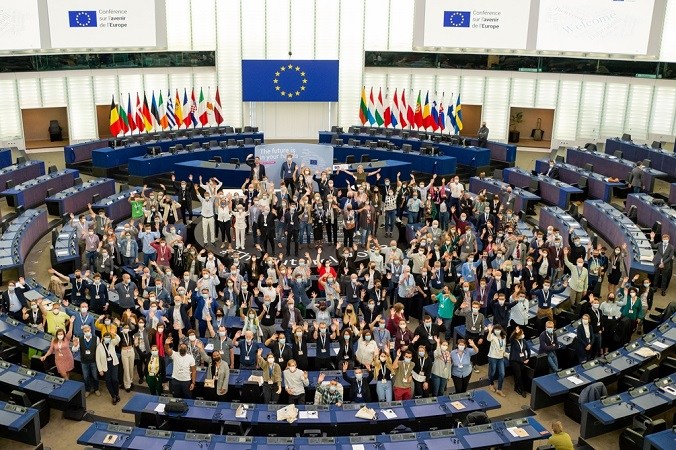 European Citizens’ Panels are a central feature of the Conference on the Future of Europe, credit: EP

With the first Europe-wide transnational panels taking place in Strasbourg (17-19 September), the Conference on the Future of Europe (CoFoE) has moved up a gear in terms of energy and ambitions. 200 European citizens from all walks of life and chosen by lot have been sitting down in the European Parliament to help shape Europe’s response to the challenges of our times.

The focus for the first of four transnational citizens’ panel was “a stronger economy, social justice, jobs/education, youth, culture and sport/digital transformation.”

The other three panels will follow in the upcoming weekends. They will cover European democracy/values and rights, rule of law, security (first meeting: 24-26 September), Climate change, environment/health (first meeting: 1-3 October), and EU in the world/migration (first meeting: 15-17 October).

It is a good time to take stock, not just from the perspective of the EU institutions but also from that of civil society.

Ulrike Liebert, an expert on citizen participation in EU decision-making and co-author of the book “Democratising the EU from Below?” has called the CoFoE an “unprecedented development in European democracy – an experiment in bringing citizens directly into EU policy-making”.

We should welcome this ambitious transnational exercise in citizen engagement. At the same time, we need to carefully calibrate our expectations about the possible outcomes. Many if not most of the EU’s 450 million citizens have never heard the phrase “Conference on the Future of Europe”. They would be unlikely to know what it means even if they had.

But just as with NASA’s mission to Mars, the way to excite people about the conference is to frame it in a longer perspective. We as citizens, as well as our political leaders, need to show that we are prepared to do what it takes for European democracy to enter a new era. Historians might well then look back in years to come and see the CoFoE as a watershed moment.

It is early days, but an interim report has already showcased much of the Conference’s potential as well as drawn attention to some of its current limitations.

For those of us who do believes in the future of European democracy, the biggest plus about the CoFoE must be the fact that it is taking place at all. After a year-long delay and endless inter-institutional squabbling, CoFoE finally got underway in June with the launch of the online digital platform.

Firstly, the mere existence of the conference, says Ulrike Liebert, “shows that after 70 years of integration by stealth – deal-making by national leaders – the EU is no longer able to cope with Europe’s manifold challenges, from extremism and illiberalism to climate change”.

Secondly, we should be encouraged by the fact that the Conference does appear to be taken seriously by many of the EU’s leaders. In her State of the Union address, Ursula von der Leyen emphasised the role of citizens, and particularly young people as the key voices that will shape Europe’s future.

Expectations are high. The European Youth Forum has said in a position paper that “the Conference is a unique opportunity for the institutions to improve the lives of young people across Europe!”

Thirdly, the CoFoE is clearly an example of a mechanism by which direct democracy can complement rather than substitute channels of representative democracy. Groups such as Citizens Take Over Europe, which are campaigning for a more grassroots-based approach to European decision-making, will be encouraged by this development.

According to the first interim report on CoFoE which was published in August, half of those who have taken part in the conference so far are under the age of 35. 50% of respondents are graduates. Only 15% are women.

Dominik Kirchdorfer, President of European Future Forum fears “the Conference will not reflect the positions of all Europeans, just those already engaged in the EU bubble”. Only 25,000 of the EU’s 450 million citizens have so far taken part in the conference.The Civil Society Convention (which has five of the eight civil society seats at the plenary sessions of CoFoE) has also called for the inclusion of EU accession states (candidate countries) in CoFoE.”

Younos Muhammaddi, President of the Greek Forum of Refugees, believes an inclusive Europe must mean “an opportunity to strengthen the participation of refugees and migrants, who should not be considered as beneficiaries but as contributors and part of the solution”.

A second concern relates to methodology. Bent Bonde, Europe’s People’s Forum makes the point that the CoFoE secretariat has provided member states with “clear standards for how national citizens’ panels need to be set up to ensure that they are representative”.

A common methodology for conducting citizens’ panels will be essential to ensuring coherence between regional, national and European assemblies of citizens if the conclusions reached by the Conference are to have validity.

However, the 27 national technical partners of Europe’s People’s Forum believe that most member states have yet to conduct systematic citizens panels based on the guidelines.

The third and final concern relates to the legacy of the conference but also points to how citizens can measure its success. For Piotr Sadowski, President of Social Platform, “citizens and civil society organisations have been working on the future of Europe for years.”

So far, only the European Parliament in its resolution on ‘Citizens’ dialogues and Citizens; participation in EU decision-making’ has been clear about how European leaders can build on the outcomes of the CoFoE and create permanent mechanisms for citizen participation.

A similar commitment from the Commission and the Member States would do much to energise the conference and widen both interest and engagement. CoFoE could then become the launch pad not for an attempt to put a woman on Mars, but for something far more ambitious – the creation of a Europe of the citizens.