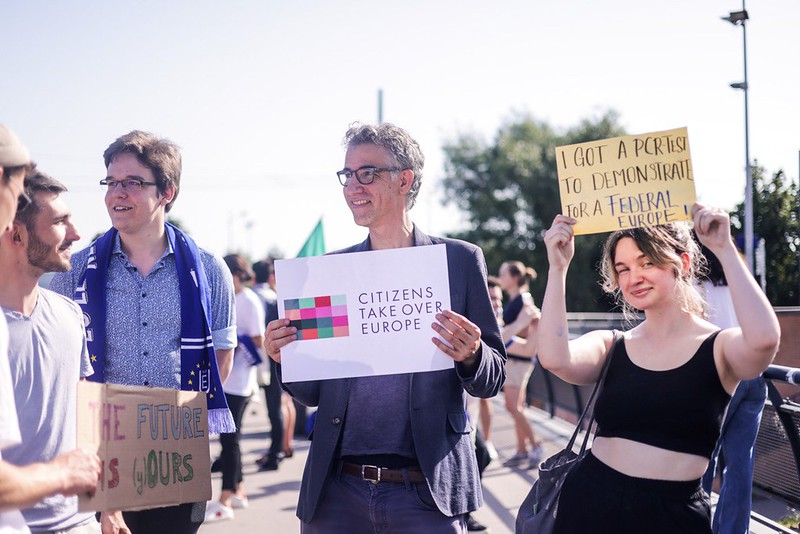 Our voice is already raised, time to listen

“Make your voice heard” is the official slogan of this Conference, as it states on its participative online platform. Citizens Takeover Europe members heard this loud and clear and organised, as a coalition CSOs, two distinctive actions on the 19th of June.

Firstly, several members gathered in Strasburg in front of the European Parliament for a small-scale protest to show that despite the very few number of seats allocated to CSOs in the Plenary, organisations still want to have a say on the process of the Conference itself, as well as on the content of its discussions.

Citizens Takeover Europe members were joined by MEPs Daniel Freund and Helmut Scholz, both seating on the Executive Board of the Conference, who showed their support for a better inclusion of CSOs and higher direct participation of citizens in the EU democratic processes.

CTOE published its Open Letter sent to the Executive Board of the Conference calling for more conclusion, which was co-signed by more than 62 organisations in just a few days. This keen interest of so many organisations joining together to send out a clear message on the necessity for more inclusion shows the eagerness of CSOs for a better representation of citizens, especially those from under-represented communities.

“The Conference has so far not made adequate provisions to include marginalised and underrepresented communities. The European Citizens’ Panels are the main innovation of the Conference, and a key instrument to reach underrepresented people. Unfortunately, no quotas have been set to ensure the representation of underrepresented groups such as racialised people, LGBTQI+ people, people with disabilities, etc. Additionally, EU residents without EU passports and non-binary people seem to be categorically excluded from the panels. […] It is in our common interest that this Conference becomes a success, but it can only become a success if all of Europe’s citizens and residents are provided access, included and treated as equal partners in this dialogue”

Including EU citizens & residents who are actually representative of its population’s diversity is the first and necessary step towards a public dialogue that only resonates with the majority but also helps (re-)connect the population with its EU institutions. However this can be achieved only by providing a safe space for all those voices to be heard loud and clear. The well-know presence of some oppressive, as well as openly racist and homophobe notables in the composition of this Conference, does not provide the adequate space for a number of citizens to feel free and protected to publicly express their views on the future that they wish to have which includes the protection of their fundamental rights.